When was Thermography First Used to Investigate Breast Cancer?

Digital Infrared Imaging was first used to investigate breast cancer in 1957 by Dr. Raymond Lawson, M.D., a surgeon and tumor metabolism researcher.  Since then, there have been over 800 peer-reviewed studies in medical literature, studying over 300,000 women.  In 1982, the FDA approved thermography as a breast screening procedure.  Over the past 30 years, there have been larger studies supporting its effectiveness, as well as the development of strict, standardized protocols, and technological advancements in imaging hardware and computer processing.

The Susan G. Komen Foundation funded a study released in May 2007, that essentially found that our increasingly polluted and toxic environment is much to blame for the rise in cancer. As reported in the press: [11]
More than 200 chemicals – many found in urban air and everyday consumer products – cause breast cancer in animal tests, according to a compilation of scientific reports published today.

Writing in a publication of the American Cancer Society, researchers concluded that reducing exposure to the compounds could prevent many women from developing the disease.

The research team from five institutions analyzed a growing body of evidence linking environmental contaminants to breast cancer, the leading killer of U.S. women in their late 30s to early 50s.

Experts say that family history and genes are responsible for a small percentage of breast cancer cases but that environmental or lifestyle factors such as diet are probably involved in the vast majority.
In other words, environmental toxins continually pollute the body. Our natural detoxification systems work less efficiently over time. More free radicals are formed, damaging our DNA. The stage is set for the disease.

Thermography is a screening tool which can help raise suspicions of breast cancer at an early stage when there is still a chance of complete cure. 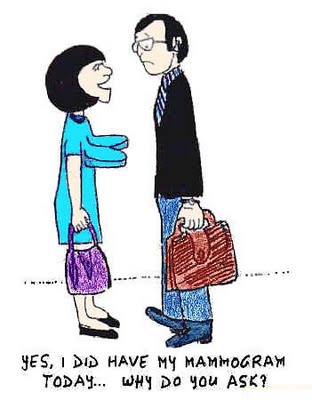 Researchers have long warned that the compressive force used to obtain useable mammograms may be a contributing factor to breast cancer:

The British standard for the force used to squeeze the breast as flat as possible corresponds to placing twenty 1 kilogram bags of sugar on each breast. Researchers [at the University of Aberdeen, Scotland] fear that this force may be excessive and enough to dislocate and spread any existing cancer cells. Animal experiments have shown that the number of cancer sites can increase by as much as 80% when tumors are manipulated mechanically. A recent study in Malmo, Sweden found that the death rate from breast cancer among women under 55 was 29% higher in a group which had been screened with mammography than in the unscreened control group. [2]

There is mounting evidence that the x-rays from repeated mammograms induce cancer. Dr. John W. Gofman, an authority on the health effects of ionizing radiation, estimates that 75 percent of breast cancer could be prevented by avoiding or minimizing exposure to the ionizing radiation. This includes mammography, x-rays and other medical and dental sources.

“Since a mammogram is basically an x-ray (radiation) of the breast, I do not recommend mammograms to my patients for two reasons: 1) Few radiologists are able to read mammogams correctly, therefore limiting the procedure’s effectiveness. Even the man who developed this technique stated on national television that only about six radiologists in the United States could read them correctly. 2) In addition, each time the breasts are exposed to an x-ray, the risk of breast cancer increases by 2 percent.”

The August 2007 issue of Radiology bemoans the growing number of mammography centers across the United States that are closing down. Radiologists blame low reimbursement from the insurance companies and a frightening degree of liability.

With mammograms, the false negative reading rates (not detecting cancers) range from 10% to 40%.

According to the 2002 Breast Cancer Study, issued by the Physician Insurers Association of America (PIAA), internists were named in 7% of the surveyed failure-to-diagnose breast cancer suits brought during the 1990s. Family physicians were named in 11% of cases and gynecologists in 29%. Radiologists topped the list, however, being named in 40% of all failure-to-diagnose breast cancer claims.